skip to main | skip to sidebar

EMERGENCY MEET HELD UNDER A TREE 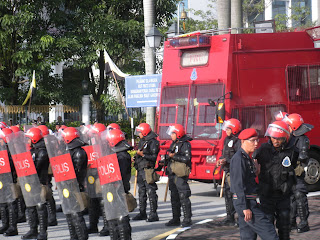 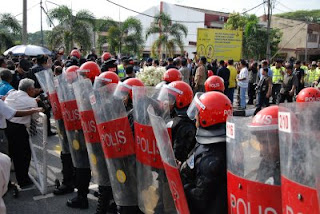 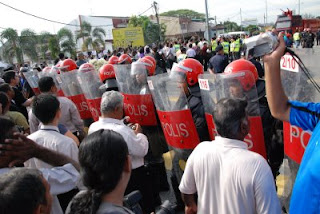 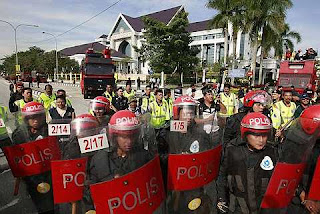 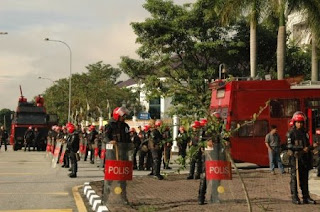 At an emergency assembly meeting held under a tree in a car park next to the state secretariat, the Pakatan representatives passed motions to support Nizar as the menteri besar as well as to dissolve the state assembly.

Meanwhile at the Ipoh High Court, a new twist developed when judge Ridwan Ibrahim told Speaker Sivakumar's lawyers that they had no legal standing to represent the speaker, who should be represented by the state legal advisor.
See below as developments unfolded.

11.15am: About 300 people have gathered at the DAP headquarters, listening to a ceramah by Pakatan leaders.

10.57am: Nizar also urged the people to stay calm and follow the law. He urged them not to emulate the troublemakers who had tried to stop him and the other representatives from entering the state secretariat earlier today.

10.53am: Ngeh also said that Speaker Sivakumar will initiate contempt proceedings against the police and the state secretary.

10.50am: State DAP chief and senior exco member under the Pakatan government Ngeh Koo Ham: "It is a very sad day. We have descended into a police state."

10.49am: Nizar says that he will try to get an audience with the Sultan of Perak to inform him the decision of the House. He insisted that the sitting was held in accordance with the rules and regulations.

10.46am: Nizar at the press conference: "We held sitting under a tree based on the doctrine of necessity because we were prevented from entering the assembly but we had to fulfil our duties based on the notice issued by the speaker".

10.35am: A new twist at the Ipoh High Court. Speaker Sivakumar's lawyer Tommy Thomas held a press conference to say that the judge had ruled that private lawyers have no legal standing to represent the speaker.Thomas said that according to judge Ridwan Ibrahim only the state legal advisor can act for the speaker since he (the speaker) is part of the state government.
With this ruling, Thomas and the other lawyers withdrew themselves from representing Sivakumar. Thomas said that they would be taking instructions from Sivakumar on the next course of action.

Thomas also said that their arguments that it would be a conflict for the state advisor to represent the speaker was dismissed by the judge.

He also said that the judge dismissed their application to conduct watching brief with the right to submit on behalf of the speaker.

The issue of legal standing was raised by Zambry's lawyers.

10.31am: Sivakumar is now heading towards the DAP headquarters nearby where he will be holding a press conference to explain the next course of action. Nizar is also expected to hold a press conference there. The DAP HQ is located right opposite the state secretariat's rear entrance.

10.30am: The speaker has adjourned the historic assembly meeting. Sivakumar will now have to present the motions to the Sultan of Perak for further action.

10.25am: The second motion to dissolve the state assembly was also mooted, debated and passed unanimously.

The emergency sitting under the tree also passed a third motion - to adopt the decision of the rights and privileges committee headed by Sivakumar to suspend Zambry and his six exco members.

10.23am: The first motion was passed unanimously. Every present Pakatan representative shouted 'setuju' (agree) when a vote was taken on the motion.

10.20am: The first motion to express confidence on Nizar as the menteri besar is being tabled now.

10.18am: Sivakumar is in his full speaker's robe to chair the meeting. It is held in a very formal manner. He told the viewing crowd not to clap or cheer and to respect the meeting.

10.15am: The meeting starts with a prayer session, It is held under a tree, without any chairs for the state representatives and the speaker to sit.

10.05am: Meanwhile at the Ipoh High Court, lawyers from both sides are learnt to have been in the judge's chambers for the past 30 minutes.

10.01am: The Nizar entourage has stopped at the car park located some 50 metres away from the state secretariat's main entrance and are huddled in a meeting. Speaker Sivakumar is not in this group.

10am: Nizar and the state representatives are leaving the area. They are headed to the DAP headquarters and will be holding a press conference there.

Some 200 Pakatan supporters are still waiting at the state secretariat entrance.

9.50am: Eye-witnesses are saying that the police have asked Speaker Sivakumar alone to enter the state secretariat. This could not be confirmed.

9.49am: The police are ordering the crowd to disperse. The crowd is shouting 'Hidup Rakyat!'.

9.45am: Ipoh OCPD Azisman Alias refuses to negotiate, says no one is allowed to enter. The police are pushing away the Pakatan state representatives away from the main entrance. The situation is very chaotic.

9.40am: Nizar's people are negotiating with the police now as the FRU are not allowing anyone inside the state secretariat. The crowd now stands at about 200, most of whom are Pakatan supporters. The water cannon in pointed towards the crowd.

9.30am: Ousted Menteri Besar Nizar and his state representatives arrive at the state secretariat.9.25am: A slanging match ensues between BN and Pakatan supporters at the main entrance of the secretariat. The BN supporters showered profanities at the Pakatan lot who had been shouting ‘reformasi!'.

9.21am: The police and FRU trucks are blocking the main entrance to the state secretariat. The Pakatan state representatives are expected to try to get into the building to go to the state assembly through this entrance.

9.20am: The crowd - a good multi-racial one - at the state secretariat has swelled to about 100 now.

9.15am: Pakatan state representatives who had earlier met at a nearby hotel are on their way to the state secretariat.9.10am: Lawyers from both sides are in the court house.

9am: About 40 FRU personnel in full gear position themselves at the rear entrance of the state secretariat. Some of them are armed with rifles and tear-gas launchers.

8.55am: At the Ipoh High Court - no crowd, no police. Only lawyers for the speaker are present so far. This defence team is led by constitutional expert Tommy Thomas, Chan Kok Leong, Philip Koh Tong Ngee and Augustine Antony. Several other lawyers are expected to join them.
Perak MB Zambry Abd Kadir's two applications will be heard today. The first is on the Speaker Sivakumar's use of the undated resignation letters of three BN-friendly independents to vacate their state seats. The second is over the suspensions of Zambry and his six exco members.
The matters will be heard before Judicial Commissioner Ridwan Ibrahim at High Court 4.
Zambry and Co are not expected to be present in court today. Their defence team is led by Mohd Hafarizam Harun with Badrul Hishah Abd Wahab, Faizul Hilmy Ahmad Zamri.

8.50am: About 50 curious onlookers have gathered at the rear entrance of the state secretariat. "No signs of any trouble," says Malaysiakini journalist Andrew Ong.

8.30am: Roadblocks have been set up since yesterday along the main road leading to the state secretariat. No vehicles are allowed near the building.

More than 100 police personnel are on standby at the state secretariat. Dozens of journalists are also ready for action.

Meanwhile Menteri Besar Zambry Abdul Kadir's legal suits against Speaker V Sivakumar is expected to be heard at 9am at the Ipoh High Court.
Posted by Dr Ahmad Muhammad Mujahid at 8:23 AM